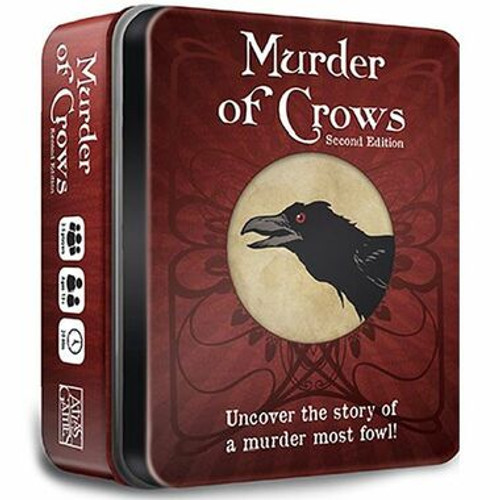 A lightweight card game where players uncover the story of a murder most fowl.

Details:
-When a player wins by spelling M-U-R-D-E-R, those cards’ flavor text combines to tell the homicide’s tale.
-A fast game with quick turns, compact size, and a low price point.
-A great gift idea or add-on sale for horror and mystery fans.
-Second Edition has several improvements, cards are now tarot-sized, and optional two-player variant has been added, and it now comes packaged in a convenient
tin case.

Gameplay Basics:
-Second Edition includes The Murdered Third, an optional two-player variant. Players will draw for a “murdered” third player and apply the negative effects of that
card.
-Each letter card has a simple ability. For example, “U” is for “Uncover”: When you play it, everyone else reveals their hands, and you take a card from someone.
-Every card can be used to counter opposing plays, by matching the number of crows that appear.
-Spell M-U-R-D-E-R to win!