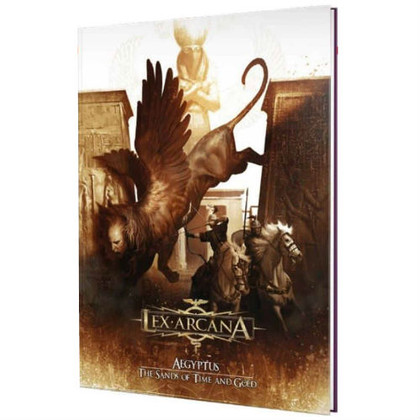 Aegyptus – The Sands of Time and Gold is the first official setting module for Lex Arcana — An Empire without End, describing the beautiful and mysterious Province of Aegyptus. In the land of the ancient pharaohs, descendants of the gods themselves, the Cohors Auxiliaria Arcana must face intrigue and conspirators, curses from times forgotten, sand demons and secrets so dangerous they could break the wisest of minds.

In this book you will find information on the main regions, cities, and individuals from the Delta to the Vale of the Nilus, Lybia and Cyrenaica, the desert, and the Isle of Crete. The module contains endless plot and adventure hooks, ranging from the greatest threats of the Province to its most famous treasures, and millennia old mysteries. There are also tens of tables and sidebars with artifacts, encounters, and other dangers to throw into the mix. Players will find new rules, specializations, weapons, special actions and conditions, in addition to new enemies, monsters, and rituals.

The volume also includes three breathtaking adventures that see the Custodes travel from Creta to the western oasis, from the lush swamps of the Delta to the most dangerous of lost cities in the desert.

Are you ready for the sands of time and gold?

- 176 pages hardcover volume on Aegyptus, including detailed descriptions of regions, cities and important people;
- sections dedicated to Culture, Economy and Religion of the Egyptian Society;
- a map of Aegyptus Superior, and three ready-to-play adventures.

Lex Arcana RPG: Mysteries of the Empire I (PREORDER)

Lex Arcana RPG: Mysteries of the Empire I (PREORDER)