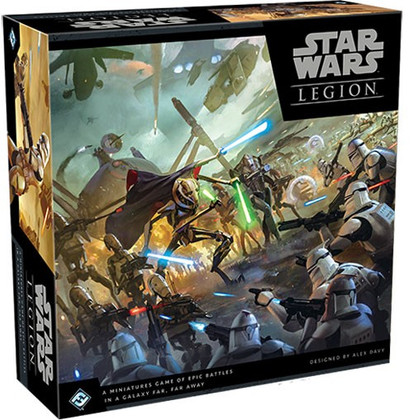 *Box has cosmetic damage. Game components may have ding & dents.

The Separatist Alliance poses a threat to peace in the galaxy, wielding a massive droid military with overwhelming numbers. Standing against them are the clone troopers of the Galactic Republic, who are trained as soldiers from their conception and deeply loyal to their cause. The war between them is an epic struggle in which every battle could turn the tide and change the fate of the galaxy.

Experience the legendary ground battles of Star Wars! Command your forces as they clash in epic encounters. This core set introduces the Separatist Alliance and the Galactic Republic factions to Star Wars: Legion. It contains everything that two players need to stage a battle between the Separatist droid forces and the clone soldiers of the Republic. This core set can be used as a starting point for collecting Star Wars: Legion miniatures and for building and customizing your own Separatist or Republic army!